Is the Personal, the Political? Fringe Blog no 1

Early in the Edinburgh Fringe, and already themes are becoming apparent. The gap between the personal and the wider population seems to be a significant theme, both directly and indirectly! It is an obvious factor when considering the political situation, and the increase in political topics at this years fringe has maybe contributed to the significance of this (see my piece on this in the Morning Star here ) but it hasn't only impacted on obvious political material.

Hindsight - a first play from Scottish comedian Keir McAllister has no obvious political message, although the broad topic of individual decisions and their impact on others - especially when a male ego is involved - has considerable resonance in many gender politics debates!

How much do we make decisions affecting other people in our own interests, and how often do we take theirs into account? And if we only look at it from our perspective, can we ever supersede our own ego?

McAllister gets that across in what is essentially a one person play - albeit with three actors. And he does it with humour and humanity. Obviously having a director of the calibre of Phillip Differ, and actors like Raymond Mearns, James Kirk and Paul Sneddon, all regulars on the standup circuit, gives the play a fighting chance. You should give it more than that. It is worth it and a good first start. It's at the Assembly Rooms until Aug 24,  1.15pm

One of the plays successes is that it recognises that we may not be aware when we take decisions for our own personal advancement, and not for the greater good. Matt Forde isn't so self aware. His show The Political Party, addresses his enthusiasm. An admitted Blairite, Forde's view is that politics needs more 'characters', and he proceeds to identify (and impersonate some). 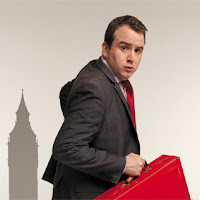 This should be more fun than it is. An unrepentant political enthusiast (he was out canvassing at 13!) Forde tries to convince us that the whole thing is such fun, that people whose views are frankly objectionable are great personalities and have charisma. I'm not sure, however, that Nigel Farage as a drinking buddy convinced many people (I'm glad to say).

But it isn't in this that the problems arise for this performance. Even an hour in the company of political personalities leaves one wanting more on the issues. He does the voices well, but Forde is an impressionist, whereas Ian Grieve (who plays Gordon Brown in The Confession of Gordon Brown) inhabits his part. It is also an example of how limited the politics of personality are. Not terrible, but it begins to pall. Matt Forde is in the Pleasance Dome until the 25 August, 4.00pm.

I wont be back in Edinburgh until later in August. Hopefully more culture and politics will be winging it by then!
Posted by Chris Bartter at Monday, August 05, 2013