Culture and the labour movement - a key role for Trades Councils

Last Tuesday,  Jamie Caldwell – Unite Community Co-ordinator for Scotland – penned a piece in the ‘Voices from Scotland’ section of the Morning Star arguing the importance of arts, music and culture in bringing people to politics and inspiring them to join the movement for change.
It is a timely reminder of the importance of the labour movement’s involvement in the arts and cultural scene – an involvement that goes back at least as far as the Rose Schneiderman quote from 1911/2 - "The worker must have bread, but she must have roses, too." It was a prominent part of socialist and labour movement work in thirties and forties Glasgow with the Unity Theatre, Left Book Club groups and the Trades Council’s Film Society. Similar organisations existed in other cities.
In more contemporary times the TU movement was key to the formation of  Glasgow’s MayFest, - as were left theatre groups such as Dave MacLennan’s Wildcat -  and it is good to see increasing arts and musical input more recently around the International Workers’ Day celebrations. Glasgow’s own Friends of MayDay programme is one of these developments.
The role of Trades Councils can be crucial in the success of this co-ordination, and it is good to see a recent increase in such activities by Trades Union Councils (the new name for Trades Councils) in and around Glasgow.
Glasgow Trades Council itself starts the list this week with their hosting of the book launch by American union organizer and author, Jane McAlevey. Entitled No Shortcuts, Organising for Power, it’s on tonight at the Lighthouse and while it has been sold out, there might be some returns available via the FB page.
Jamie’s article mentions the Ken Loach film I, Daniel Blake, and the work of Unite and the People’s Assembly in promoting it. One of these screenings is being hosted in Clydebank Town Hall, by Clydebank Trades Council with support from the Morning Star and a multitude of TUs, on Thursday this week at 7.00pm. Tickets here.

Clydebank TC are also prominent in a mini tour of the play Dare Devil Rides to Jarama. A play about motorcycling and the Spanish Civil War, it is produced by Townsend Productions – who gave you The Ragged-Trousered Philanthropist and the Shrewsbury pickets play United We Stand. It is also playing Clydebank Town Hall (on 6 March), tickets here. If you can’t make this showing, there is also one organised by South Lanarkshire TC in the Blantyre Miners Welfare two days previously (4 Mar). Tickets from UNISON South Lanarkshire 01698 454690 or from the Blantyre Miners Welfare itself. 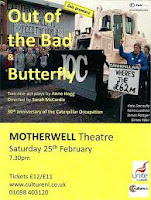 30 years ago elsewhere in South Lanarkshire (in Uddingston actually) workers at the Caterpillar factory occupied their workplace to prevent it being closed. The occupation lasted 103 days. Our friends at FairPley – other valuable contributors to the increase in cultural activity on the left – have commissioned two, one-act plays from Anne Hogg on the aftermath of the occupation. Out of the Bad and Butterfly are premiering at Motherwell Civic Theatre on February 25. Tickets from Culture NL here..
Not a bad contribution to Jamie’s important call for the use of cultural events in socialist and labour movement organizing. I have no doubt that there are other Trades Union Council’s across Scotland who are organising similar events. If so, it would be good to support them and to promote them using social contacts, both digital and otherwise. And if they are not – what about getting them to do so?
As a wee add-on, while I was in London on a break, the Morning Star published my final round-up review of Celtic Connections. Concentrating on the CC theme of Women of Song it can be found here.  And while we’re on the topic of the Star and Arts/Music coverage, there’s a nice interview by Mike Quille with a former star of  Celtic Connections, Chris Wood, in the weekend’s edition. He is a great example of how contemporary folk music is being created right across these islands.
Posted by Chris Bartter at Monday, February 20, 2017